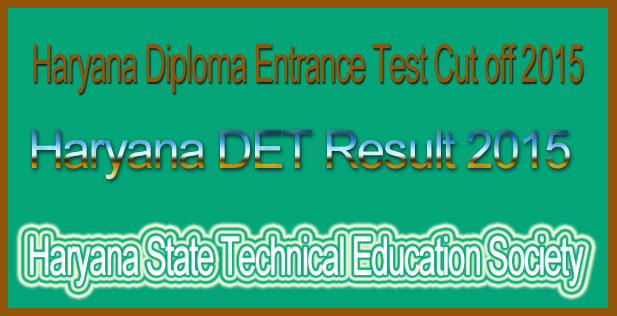 Exam was conducted Diploma Entrance Test (DET) in the month of May 2015 for admission to 3 years Diploma. HSTES has uploaded the result on website and students can log on to the Main web Portal of the HSTES 2015 for getting their HSTES result 2015.

There is huge number of students applied for the Diploma Entrance Test. There are more than 37 different courses available in Diploma (Engineering) in state of Haryana. To get result students have to enter their roll number and date of birth for DET 2015 result.

All those students those who got passed after checking their Counselling Dates, Rank List and Cut-off marks list 2015 on the main web Portal of the Haryana DET 2015.

The application forms were submitted online from 16th April 2015 to 12th May 2015 and reservation will be given as per the government norms. Eligibility for applying for this exam is minimum 10th passed from recognized board.

Now HSTES has conducted the exam and declared the result on main website of HSTES.Haryana State Technical Education Society (HSTES) was come in existence in the year 2007. HSTES is responsible for conducting Entrance exam for the admission of Diploma in Pharmacy courses.